One of my very favourite people in this writing world wrote a great post about Keeping Mother’s Day Real… and so, inspired by Kylie Kaden I present you the story of my Mother’s Day …

My hubby is visiting his mum interstate for mother’s day this year, and that left my two boys to their own devices, and so… despite my instructions about a cup of tea in bed (to be honest, I’d rather the sleep-in), the cup of tea didn’t arrive and eventually I got up and made it myself. In their defence, I DID get that sleep-in… 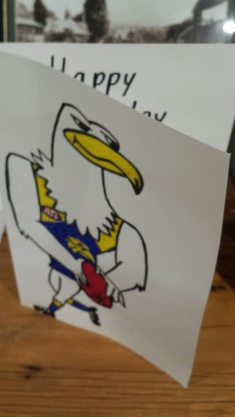 Then, Mr 11 told me that the gift he’d been making at school was a #fail … but not to fear, he made me a card instead 🙂 (Check it out – West Coast Eagles! Yay!)

And Mr 9 told me that unfortunately he hadn’t finished his gift at school… and he also hadn’t remembered to bring any part of the unfinished gift, or the card, home. #fail

Not to be deterred, I made my own breakfast and it rocked. Bacon and egg sandwich!

Then I announced that what I wanted to do for Mother’s Day was go fishing 🎣🎣🎣 … there were grumbles (we don’t often catch anything), but eventually I got the rods rigged up, including replacing a broken reel (💪), and off we trooped to Gracetown to catch a herring 🐟 (or, you know, lots of herring). 🐟🐟🐟

Mission accomplished! After about 3 hours, we returned home with 3 fish.

Mr 9 also found a packet of bait that someone must have decided to hang off a fence post on the off chance an intrepid fisherwoman and her two boys might have such a fantastic day on the line, they needed extra bait.

When we got home I discovered it was in actual fact, a bag of dog poo. #baitfail

In the bin it went!

The boys went for a shower and made their own lunch, and I scaled and gutted the fish… and ate baked potatoes with sardines…

The afternoon included football, a go on screens (for the boys), and the promise of me having a glass of wine while the boys cooked dinner… Mr 9s famous tacos! 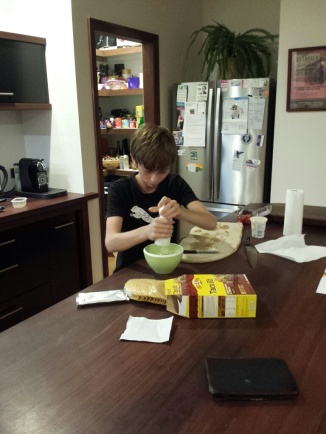 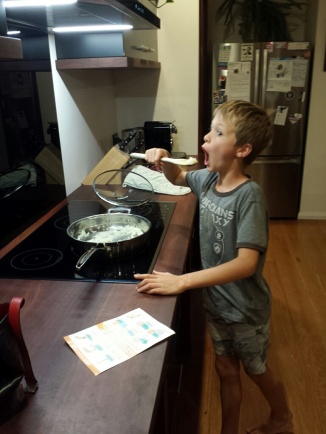 AND the tacos were awesome! #NoFail

Yes, I cleaned up the mess. Small price to pay for a night out of the kitchen – plus I got all the fun of watching the carnage, and the craft!

Tonight I think we will watch an Avengers movie together…

All in all – pretty awesome Mum’s Day for me!

Hope yours rocked too 🙂