Since I wrote and published Fairway To Heaven in January 2014, the most common reaction readers have had to the story (apart from enjoying it – thank goodness) is to ask me: “why did you write a heroine with a fanny problem?” You can insert your own word for ‘fanny’ into that sentence! For my part, I refer to Jenn’s ‘dodgy vagina’ quite openly (okay, some have said ‘explicitly’) in the book, and I did this primarily because I wanted to raise awareness about a sexual health problem for a growing number of women (and men) around the world.

Lichen Sclerosus is not cancer, and it won’t kill you (although – if it’s unchecked, there are somelinks with vulval cancer). It can be pretty damn hard to live with and manage though, and the most frustrating thing seems to be that, like many auto-immune chronic-type problems, no one really knows what causes it, and although the condition can be managed, there is no cure.

So writing a heroine with a fanny problem makes Fairway To Heaven a very contemporary romance, and a rather unusual one. While I am all for reading for escapism, I have reached the stage where I’m tired of the heroine seeing stars at the touch of her hero’s hand. I like my romance to be real. (Unless I’m reading Twilight, of course. Then they can all have skin that sparkles like diamonds, and drink ‘vegetarian’ blood, and there can be werewolves, and I shan’t bat an eyelid.)

So why did I write Lichen sclerosus into Jenn’s body, and my book?

When my kids were toddlers, I met two other mums in the playground. They had older children a similar age to mine, and younger babies that were usually in prams, or kicking on rugs. I think women generally tend to be quite frank with each other, and I think that when they have young children, women open up even more about physical matters. Any pregnant woman can probably vouch for a horror birth story she’s been told by a complete stranger on a bus! This is where I first heard of Lichen Sclerosus (in the playground, not on a bus) because one of these women had been having awful trouble resuming any kind of sex life in the months after the birth. She put it down to the physical trauma of a tough delivery… but discovered later it was a completely different kind of problem.

There is a scene in Fairway To Heaven where Jenn meets another mum in a playground near the jetty at Busselton, where most of the story is set. Their conversation isn’t about ‘dodgy vaginas’… but that conversation in the book has some of the feel of my conversations in those playground days.

When the book begins, Jenn doesn’t know what her sexual issue is. She thinks it’s hormonal, and doctors haven’t been able to give her any firm diagnosis. She discovers her partner (father of her son) cheating on her, and blames her inability to have sex, for her partner’s betrayal.

Early in the book Jenn states to her best friend: “I just want sex to feel normal again. I don’t have to see stars. I don’t want multiple orgasms. Normal. Do you think that’s possible?” 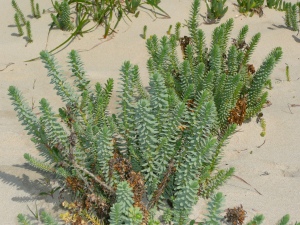 So Jenn’s very personal quest to repair her shattered ego, and regain her sexual mojo, begins when she leaves the city with her son and goes to spend time at her best friend’s beach shack at Busselton.

Some reviewers have called my book “brave” for its focus on a heroine with a sexual problem. I don’t know if it’s brave, but if I can raise some awareness about this as an area of our medicine that needs research and attention, then I think as a writer, that’s a very positive thing.

I would like to thank the two gynecologists who gave their time to help me understand this issue for women during the writing of Fairway To Heaven. There are some excellent resources on the web about Lichen Sclerosus. I have linked to some below.

2 thoughts on “A Different Kind of Heroine”