A shout out to my wonderful Beta reading and writing friends, Jennie Jones and Juanita Kees, both of whom have had wonderful book-related news this week. 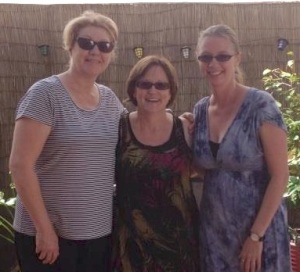 Jennie, Juanita and I met on Facebook last year, and then in person at the RWA Conference in Fremantle. We are all Escape Artists (published by Escape Publishing), and we’re living in West Australia, although I’m a fair way south of these two. This, by the way, is a good thing. I’m sure if we lived closer, we’d talk books and drink wine and very little writing would get done! After Fremantle we chatted loosely about joining forces with joint promotions or other bookish things… and this eventuated in the gem of an idea, that we form a Beta reading team.

So far, I’m proud to say, our record is exemplary! We started with Under The Cover Of Dark, Juanita’s follow-up story to Under The Hood in her Tag Raider series, staring the hunky Detective Mark and the lovely (but scarred) widow, Lily Bennetti. How could I not fall in love with Detective Mark when every line I’m reading has ‘Lily’ swooning over his cop charms? (And cop arms, and those big guns, – please, somebody stop me.) We had a giggle on Facebook mid-way through last year when Juanita posted a line about the sexy things Lily had been doing with Detective Mark, and someone (I think it was Susanne Bellamy from memory – thought it was ME!) So I wrote a little story about me, Lily & Mark which I hope to post here one day when Juanita says it’s okay.

Anyhoo… while we waved goodbye to Under Cover Of Dark and wished it well on its journey through the submission straits, I think next cab off the rank was my book, Fairway To Heaven, closely followed by Jennie Jones’ next book in her Swallow’s Fall series. This is ‘The House At The Bottom Of The Hill’ (the follow-up to Jennie’s blockbuster, ball-busting Escape’s biggest-selling wonder-book: The House On Burra Burra Lane). Yes, I am trying VERY hard to get Jennie to cull her book titles… but she does love telling a story on her front cover! Me, Jennie & Juanita call it THATBOTH… it’s much easier!

I like to think of Jennie as writing ‘Chardonnay Country’. You don’t find wheat fields, red dusty outback roads, sheep or cattle stations in Swallow’s Fall, instead it’s in the Snowy Mountains, all green and wildflower-filled, and the community and characters Jennie Jones has developed there never fail to make me giggle. I love visiting Swallow’s Fall, pet pigs and all. 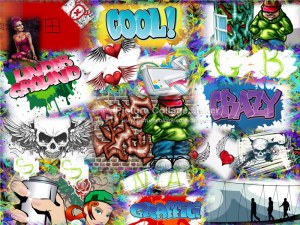 Juanita’s writing is different. Her Tag Raiders series is romantic suspense… tackling all the tough issues like teenage gang culture, drugs, street kids, homelessness and the wonderful people who assist in the rehabilitation of these teens.

Is it any surprise that after the emotion she spent on the page writing Tag Raiders, she threw us a curve ball? Juanita needed a holiday. So off to a Greek beach she went, while we all chewed our nails waiting on news about Under The Cover Of Dark… and phwoar, have we enjoyed watching her Greek Gods in their speedos on Mykonos… my little heart be still.

Then Jennie, in the space of a few months, wrote my favourite story of everything she’s done so far: 12 Days At Silver Bells House. This is a Christmas novella set in Swallow’s Fall, and it is absolutely delightful. Talking about ‘Chardonnay Country’ I loved how her heroine crashes her car in a paddock near Swallow’s Fall and awaits her rescue more worried about how she’s going to get the box of wine out of the boot (trunk), than how she is going to get out of the aforesaid mud patch in her designer heels. This novella is magic!

And the huge news that’s had us all dancing: Under The Cover Of Dark has been accepted for publication by Escape Publishing this week! And Jennie Jones has news too… although I’ll let her tell it!

So huge congratulations to Jennie and Juanita. They are two of the most generous people you could meet in the Australian writing fraternity.

And while I’m dishing out the love: It’s also been a big week (month) for two other buddies, Jenn J McLeod and Kylie Kaden, both of whom have new books (Simmering Season for Jenn, and Losing Kate for Kylie) in print and e-book that have captured readers’ attention in Australia and beyond.

It sure has been a good news week! #girlwritersrock #australianwritersrock